$500, prison or a stern telling off – what is the right punishment for forgetting to return library books? 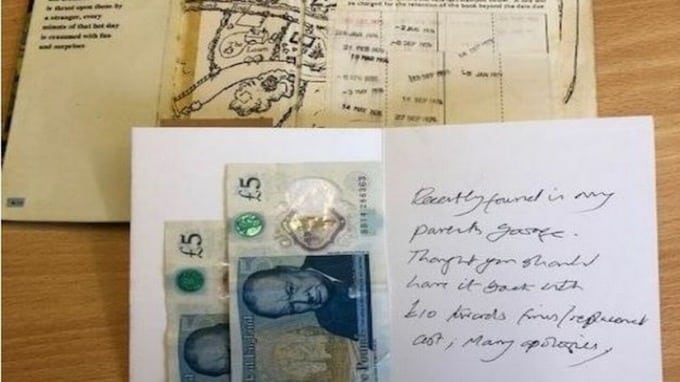 In the D-Tech offices, we’ve been following very closely the story unfolding in the USA where a woman is facing a potential prison sentence for failing to return library books on time.

Mindy Jones, a 27-year old from Michigan, has been charged with failure to return rental property, which could land her a prison term of 93 days for a $500 fine. The offending books, Night by Elie Wiesel and Where the Sidewalk Ends by Shel Silverstein, had been borrowed in 2017 before being found on her son’s bookshelf, according to Jones.

Her experience is in stark contrast to a recent story of a book returned to Bristol Library – 42 years late!

While late fees could be calculating to be as high as £2,300, using today’s fee system, luckily for this user fines are capped at £5.40 per book. Interestingly, Bristol Libraries also doesn’t charge any overdue fines for users under the age of 17, so there may have been no outstanding fine at all.

This didn’t stop the anonymous returner including £10 and a hand-written apology within the long-overdue copy of The Cherrys and the Double Arrow by Will Scott.

Far from being threatened with a jail term, an appeal has been launched to find the mystery book borrower, with the promise of no fine firmly in place. Bristol Libraries representative Hayley Cantle stated;

“We’d love to know who it was who brought it in. There’s no name on the note, and there’s no way of knowing who it was. We all just thought it was really sweet, and lovely to return it now.

“It’s a really old-fashioned book, it smelled old and had the classic old binding, and was a real bit of nostalgia for us.”

Anything you can do, NZ can do better

A library user in New Zealand managed to go one better in 2016, or 25 better to be precise! Having borrowed a book in 1948, this patron finally returned it to her local library in 2016 – just 67 years too late! The potential fine, which had climbed up to NZ$25,000 (nearly £12,000), was avoided by the woman, who chose to remain anonymous, as the library does not charge late fees for children and she had first borrowed the book in her youth.

What is the right punishment for forgetting to return library books?

Were the dramatic differences in response experiences by the users mentioned in this article simply due to the age of the borrower? Or vast chasms in the official policy of libraries around the globe? Maybe you think the forgetful users in the UK and New Zealand were lucky to escape a fine? Or enjoyed the benefit of some common sense in the face of an honest mistake?

Should any fines be capped at the RRP to re-purchase the book? Should there be an official one-size-fits-all policy for forgotten library books? Or should it be left to the personal judgment of the librarian?

Whatever your opinion on fines and when they should be issued, D-Tech’s serveIT range of library self-service kiosks are capable of collecting them via, coin, cash, card, or even Apple PayTM. To find out more visit d-techinternational.com or call us on 01394 420077.