Ten Must-See Libraries Around the UK 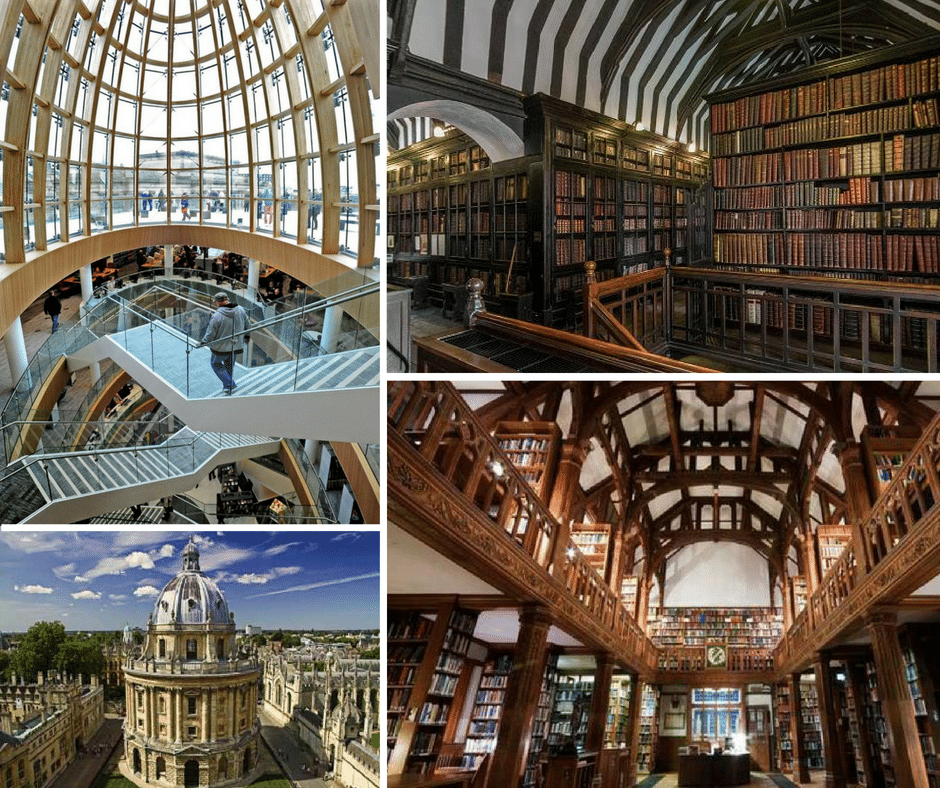 Is there anything better than a good library? At D-Tech, we don’t think so. Luckily, the UK is brimming with unique places for book lovers to discover and enjoy. Here are ten of our favourites from around the country:

The Bodleian is undoubtedly one of the better-known libraries on this list, with its illustrious history as one of the world’s oldest libraries and its position as the principal library of Oxford University distinguishing it. The Bodleian spans many libraries across the City of Oxford, with its most recognisable building, the stunningly classical Radcliffe Camera, joining the Bodleian long after the library was established by Thomas Bodley in the early 17th century. In fact the Camera, formerly known as the Radcliffe Library, was built in 1749 and remained independent of the Bodleian for many years before being taken over and renamed in 1860. The Bodleian is one of six legal deposit libraries in the UK, meaning that they are authorised to request a copy of any book published in the UK, and cumulatively its five buildings hold over 12 million items. It also possesses a more recent claim to fame in becoming a filming location for the Harry Potter franchise, forming parts of the library and the hospital wing of Hogwarts. It is only freely accessible to staff and students of the university – to whom it is known as ‘the Bod’ – but tours are available to the general public.

Another truly famous library, The British Library also holds the status of legal deposit library. Not only that, but it is the largest national library in the world by number of items catalogued- the collection includes over 150 million items with 3 million more added yearly. The building itself is the UK’s largest public building of the 20th century and in recent years has been awarded grade I listed building status. The library was originally part of the British Museum, until the British Library Act of 1972 required them to separate. The majority of its holdings came from there: most notably The King’s Library, the entire collection of King George III, given to the nation by King George IV. Numbering 650 000 volumes, it is considered one of the most important collections of the Age of Enlightenment and is currently housed in the glass King’s Library Tower in the entrance hall of the British Library. Other treasures, among many, include the world’s earliest dated printed book, The Diamond Sutra, and one of Da Vinci’s notebooks.

Chetham’s Library is unique in being the oldest free public library in the UK, having been in continuous use since 1653. It was founded by Humphrey Chetham, a successful and philanthropic Lancashire Cloth Merchant who was born near Manchester. He hoped to overcome poverty through targeting ignorance, and also paid for the education and upkeep of several boys from poor families to this end. The library building itself dates back to 1421, and during the civil war was used as a prison and arsenal. Today the library holds over 100 000 volumes, 60 000 of which are dated pre 1861. The library also holds a collection of fine arts and portraiture and contains treasures such as a rare first version of Milton’s Paradise Lost. A significant moment in the history of Chetham’s Library is the summer of 1945, when it formed the meeting place for Karl Marx and Frederick Engels, the research they undertook there ultimately contributing to The Communist Manifesto.

Gladstone’s Library is Britain’s only Prime Ministerial library, having been founded by William Gladstone himself in 1894. Gladstone was keen to share his personal library with those less fortunate than himself and started off the library with over 30 000 books from his personal collection, previously kept at his home, Hawarden Castle, nearby. For keen scholars, it is also Britain’s only residential library, built and run to accommodate guests. The library was originally housed by a temporary structure, but following Gladstone’s death in 1898, a public appeal was launched to raised funds for the current building, which was opened in 1902 as a national memorial to Gladstone. A programme of events favouring his pet topics – history, politics, theology and 19th century literary culture – keep the late prime minister’s legacy alive.

Another Manchester based library, the John Rylands library was founded by Enriqueta Rylands, as a gift to the people of Manchester in honour of her late husband. John Rylands made his fortune through textiles, becoming Manchester’s first multi-millionaire and a generous philanthropist. Although he had seven children and two previous wives in his lifetime, he was survived solely by Enriquita, who built the library to memorialise his achievements. The John Rylands Library opened to the public in 1900 but was incorporated into the University of Manchester in 1972, becoming part of what is now the third largest academic library in the UK. The impressive Neo Gothic Victorian building houses items such as the oldest known part of the New Testament, the St John Fragment, the letters of local authoress Elizabeth Gaskell, an original Gutenberg Bible and books printed by William Caxton, inventor of the printing press. While, when opened, the library had 70, 000 books and fewer than 100 manuscripts, today it houses more than 250 000 volumes and over a million manuscripts and other items.

The Library of Birmingham

A more modern addition to this list is The Library of Birmingham: formally opened by Mala Yousafzai in 2013, it is the flagship project of the city council’s Big City Plan, the most far reaching city centre development project undertaken in the UK so far. Costing £186 million, it is the largest public library in Europe, housing a million printed volumes alongside archives and photography. A notable feature is the historic Shakespeare Memorial Room, which was originally a feature of the city’s Victorian library, and has been restored and installed on the top floor of the current library. It houses Britain’s most important Shakespeare collection, containing 43,000 items including a rare 1623 First Folio. The library building also encompasses a studio theatre area, outdoor amphitheatre, outdoor garden terraces, children’s areas and a panoramic viewing platform at the very top, where visitors can enjoy an excellent view of the city. The building itself, an opulent design by award winning Dutch architects Mecanoo that is otherwise known as ‘The People’s Palace’, has received accolades such as West Midlands’ Building of the Year 2014. Testament to its popularity is the amount of footfall it attracts; the library received 2 million visits in 2015, making it the most popular tourist attraction outside of London that year.

Liverpool Central Library, after undergoing extensive restoration and rebuilding costing £50 million in 2013, had emerged as an innovative blend of old and new. The library, founded in 1860, is housed by a number of Grade II listed buildings on Liverpool’s William Brown street, but in addition to the elegant classical style of these premises, features including a beautiful modern atrium and a new Children’s Library were added, alterations that led to the library being named one of the world’s most beautiful by BBC Culture. Other attractions of the library include the circular Picton Reading Room which was built in 1875-9 and nicknamed ‘Picton’s Gasometer’, and the Hornby Building, a beautiful Edwardian building completed in 1906 which was the donation of wealthy local merchant Hugh Frederick Hornby alongside his private collection. Notably the Oak Room, which was added in 1914 to house the rarest books in the library, is home to a collection of 4000 books – most significant among these is John James Audobon’s ‘Birds of America’, acknowledged as the greatest natural history book ever produced. Liverpool Central library has also been honoured this year as The Bookseller’s library of the year 2018, citing the library’s busy events programme and focus on community as the reason for the accolade.

The Norfolk and Norwich Millennium Library, part of a building known as The Forum, is one the most successful millennium projects in the UK. The Forum was built on the site of Norwich’s previous public library, which burnt down in 1994, in a fire that also destroyed many books and precious documents. It opened its doors to the public in 2001, before being officially opened by the Queen in 2002. Designed by award winning architect, Sir Michael Hopkins, the Forum is built with energy efficient materials and features a stunning, 35 metre atrium beneath which the library is housed. The Norfolk and Norwich Millennium Library also offers a self-contained children’s library and a heritage centre which offers a wealth of information for local historians. Its position as Britain’s most popular public library might have something to do with Norwich’s reputation as the ‘City of Stories’, in its official role as Britain’s first UNESCO city of Literature.

Senate House Library, the central library of the University of London, was first founded in 1836, but moved into its current premises in 1937. The imposing Art Deco building housed the Ministry of Information during the Second World War: notably, George Orwell’s wife Eileen worked there for the Censorship Department, and her experiences inspired Orwell’s depiction of The Ministry of Truth in his famous novel, Nineteen Eighty-Four. The building has remained present in popular culture more recently as a popular filming location for a number of films and TV shows, including Cristopher Nolan’s Batman trilogy, and anthology series Black Mirror. Highlights of the library’s catalogue include first editions of books by the novelist George Elliot, and the Harry Price Library of Magical Literature, with items dating from 1472. The library holds exhibitions year-round that are free to the public, and day memberships are also available to purchase.

The Signet Library, completed in 1822, is home to the Society of Writers to Her Majesty’s Signet, a prestigious body of lawyers and solicitors dating back to 1594. While the library remains a working law library to this day, it is better known for its architectural beauty, having famously been called the ‘finest drawing room in Britain’ by King George IV. The elegant Georgian building, at the heart of Edinburgh’s old town, is now also open to the public as a restaurant and events venue.