Looking at Libraries: Library of Alexandria 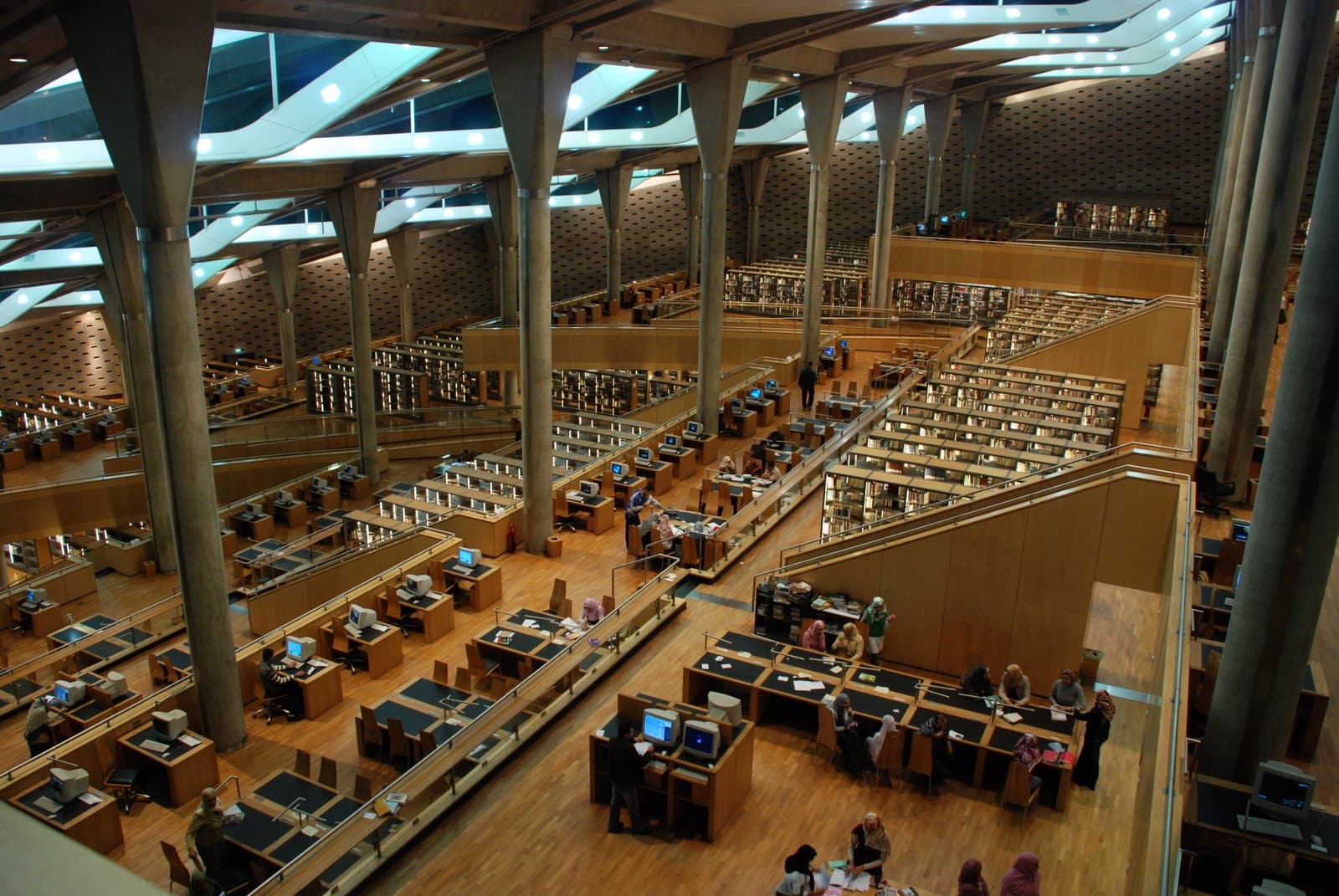 For this edition of Looking at Libraries, we will be focusing on the national library of Egypt: The Bibliotheca Alexandrina.

Founded in 2002, Library of Alexandria is a modern-day tribute to the historical Bibliotheca Alexandrina.

Described as a “Symbol of great cultural and philosophical significance”, the original library was charged with the task of collating together all of the world’s knowledge to bolster Egypt’s reputation as a wealthy and well-educated country. In 48 AD, a fire set by Julius Caesar’s army destroyed most of the library’s extensive collection of transcribed books from across the world. This act of destruction stands today as a metaphor for the loss of cultural knowledge.

The construction of the current day library was intended to serve as a memorial to the legacy of the historic building. The new building – built to resemble a rising sun – is a trilingual library comprising of books written in French, Arabic and English, making this location a centrepiece for cultural cohabitation. The Library of Alexandria features many fascinating exhibits. An example of these is the Antiquities Museum, the purpose of which is “to promote research, creativity and cultural awareness.” This exhibit stands as the first archaeological museum to be situated within a library. Another example is the Sadat museum, which stands in memoriam to former President of Egypt, Anwar Sadat, who was assassinated after eleven years in office. Items in the museum include Sadat’s copy of the Qur’an and his bloodstained military robe – worn at the time of his assassination.

The Library also features an entire portion dedicated to works written by Nobel Prize winners. The Noble Section features a collection of books by laureates from the prize’s conception in 1901 to today.

Library technology is at the forefront of the Bibliotheca Alexandrina. Highlighting this is the Taha Hussein Library for the Visually Impaired. This library uses special software to enable visually impaired readers to read the books available at the BA. The section was given its name in tribute to Taha Hussein: one of the most influential Egyptian writers of the 20th century and a figurehead of the Egyptian Renaissance. Arguably its most impressive example of library technology, the BA is home to CULTURAMA: A 180° panoramic interactive computer screen made up of nine separate flat screens. The use of this screen enables the library to convey information that is would not otherwise be possible on a regular computer screen.

The Library of Alexandria is a stunning example of humanity’s everlasting pursuit of knowledge. The BA stands to symbolise a building that once stood to serve as the earth’s most bountiful fountain of wisdom; during a time when some of the most notable scholars and philosophers still walked the earth.

To learn more about the Library of Alexandria, visit www.bibalex.org/.